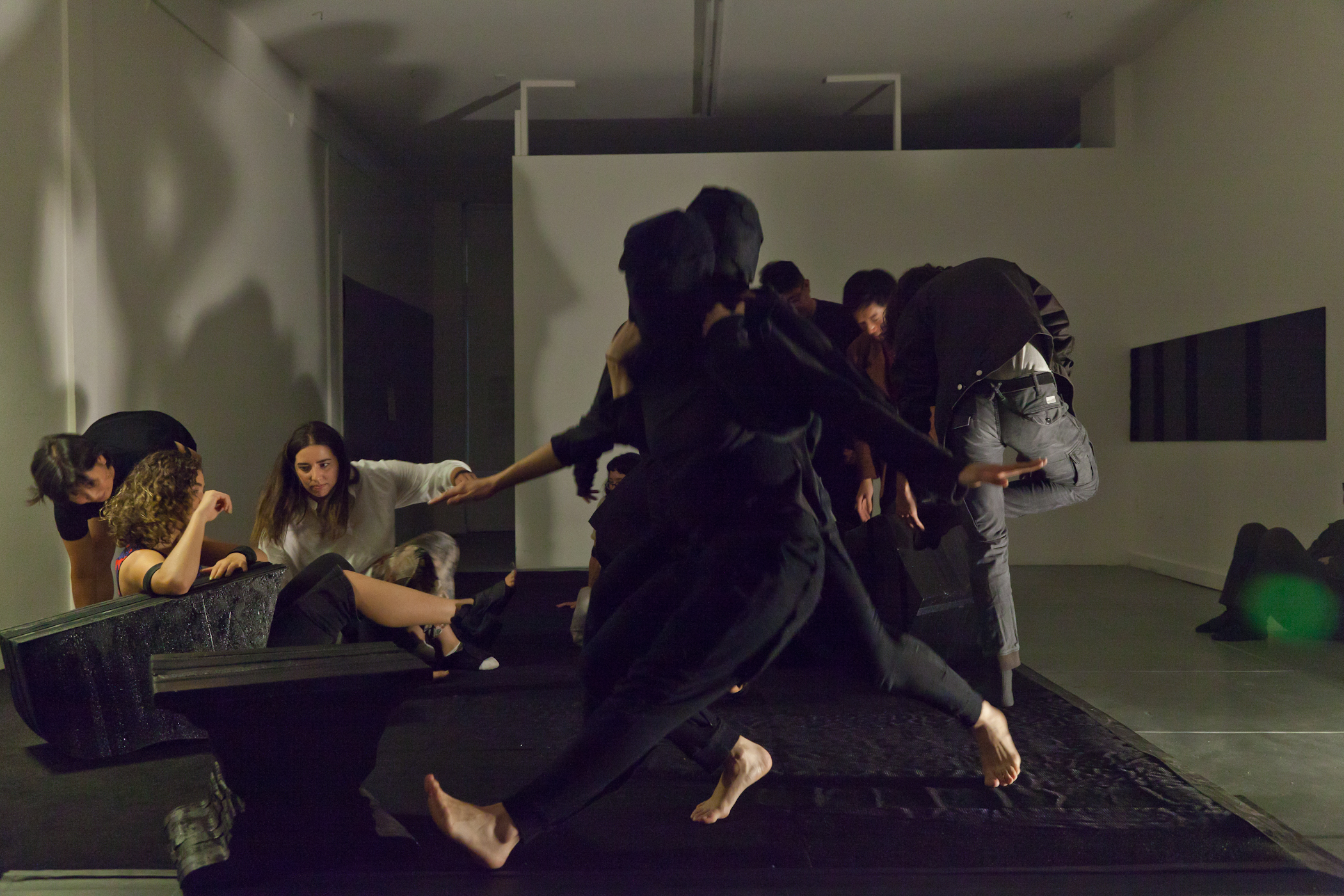 Hook & Loop is an immersive performance-environment featuring live performers in head to toe industrial-grade Velcro suits and masks in a Velcro set, which places the audience within an installation in order to evoke questions of spectatorship, complicity, bodily awareness, consent, language-based and non-verbal communications, and care.

The performances have taken place within an 18' x 12' x 10' prototype space containing interactive objects. Participants were given Velcro socks, gloves, or armbands to encourage play, exploration, and movement during the performance. 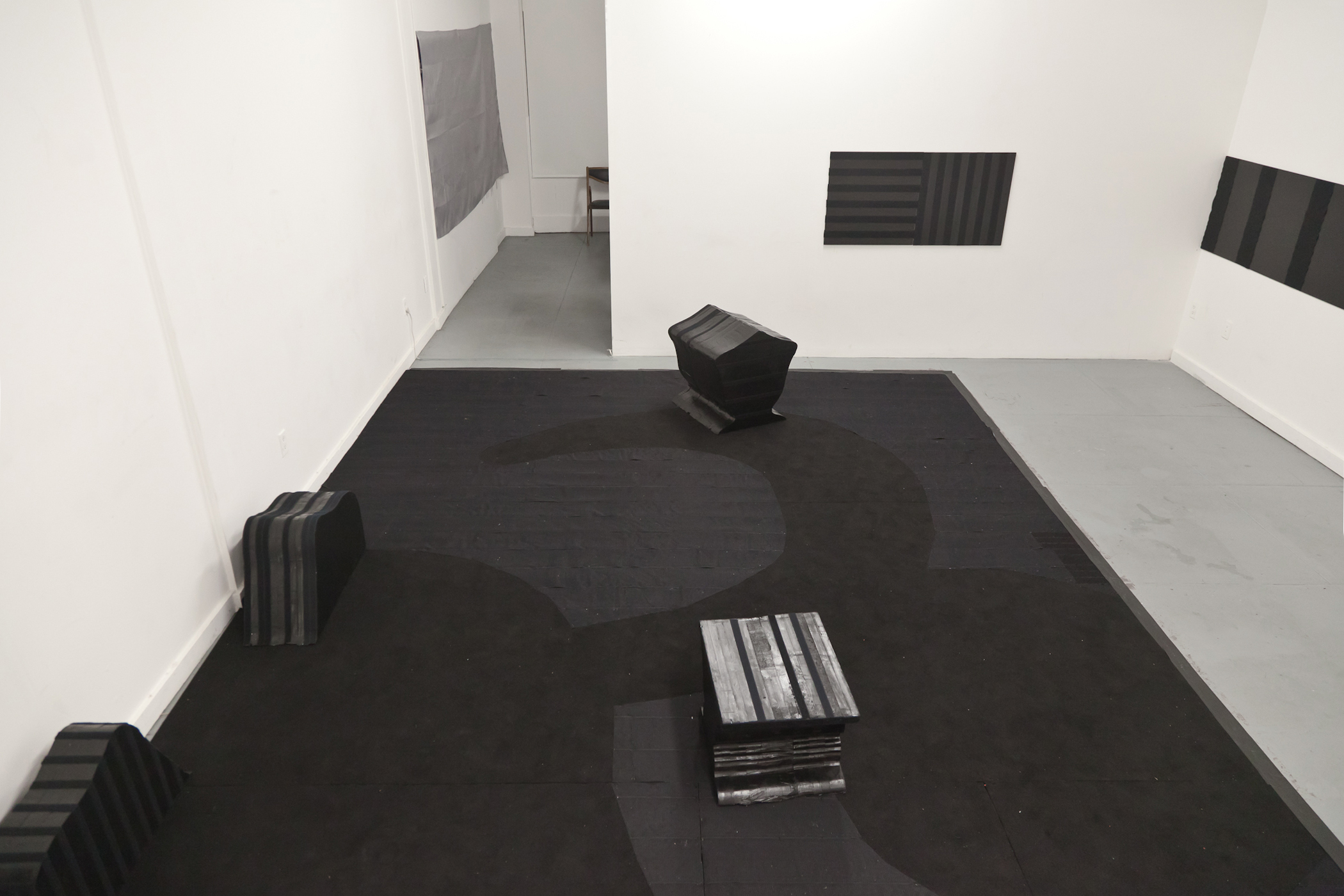 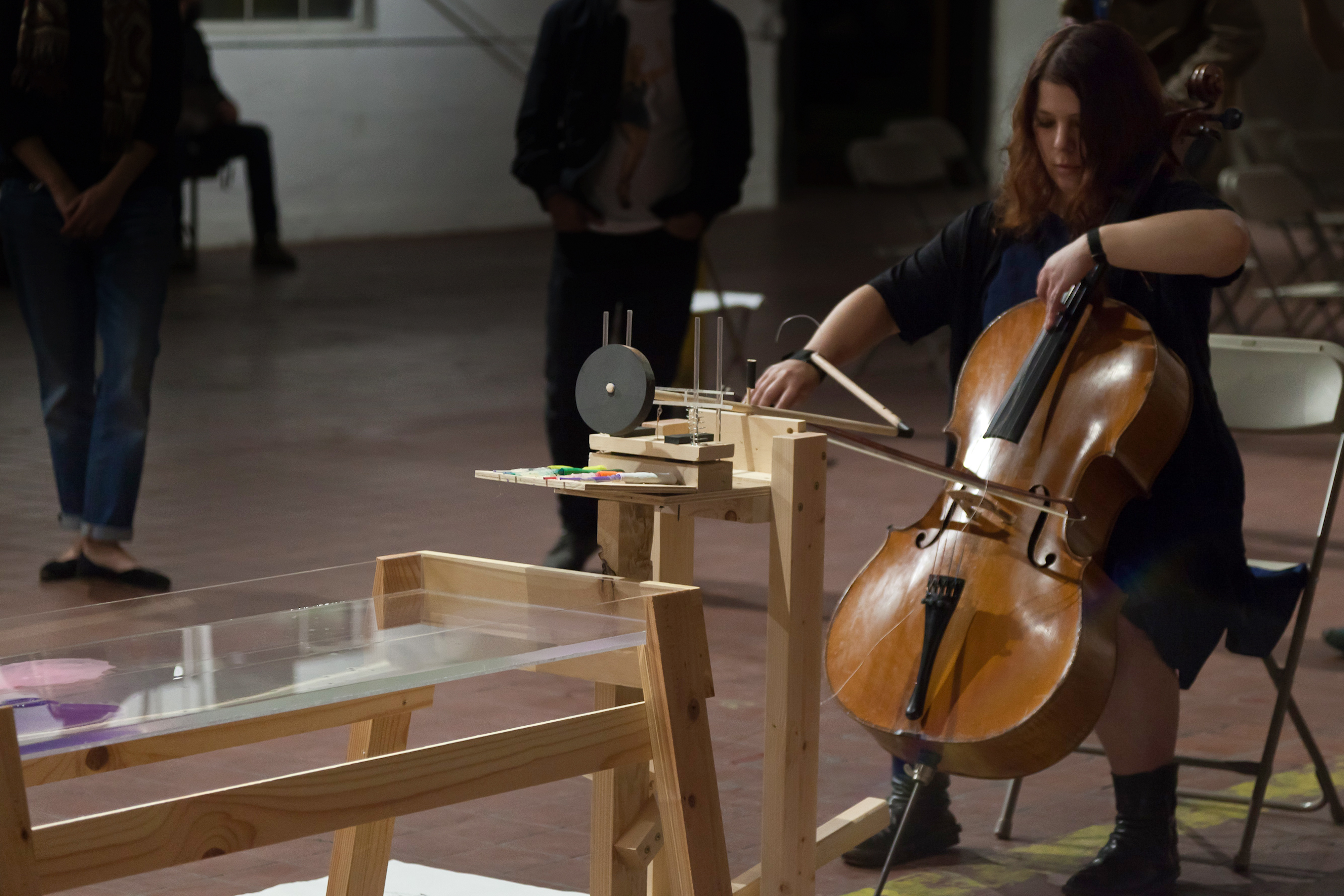 I commissioned my friend Judy Hamann to write an new score for my marbled score printing contraptions. (2012 - ongoing) The first was made with Thom Norman in Glasgow. This took place at Bread & Salt in San Diego and we sold out all of the prints! (We produce only 1 print per performance, but can do multiple performances of the same piece each evening.) 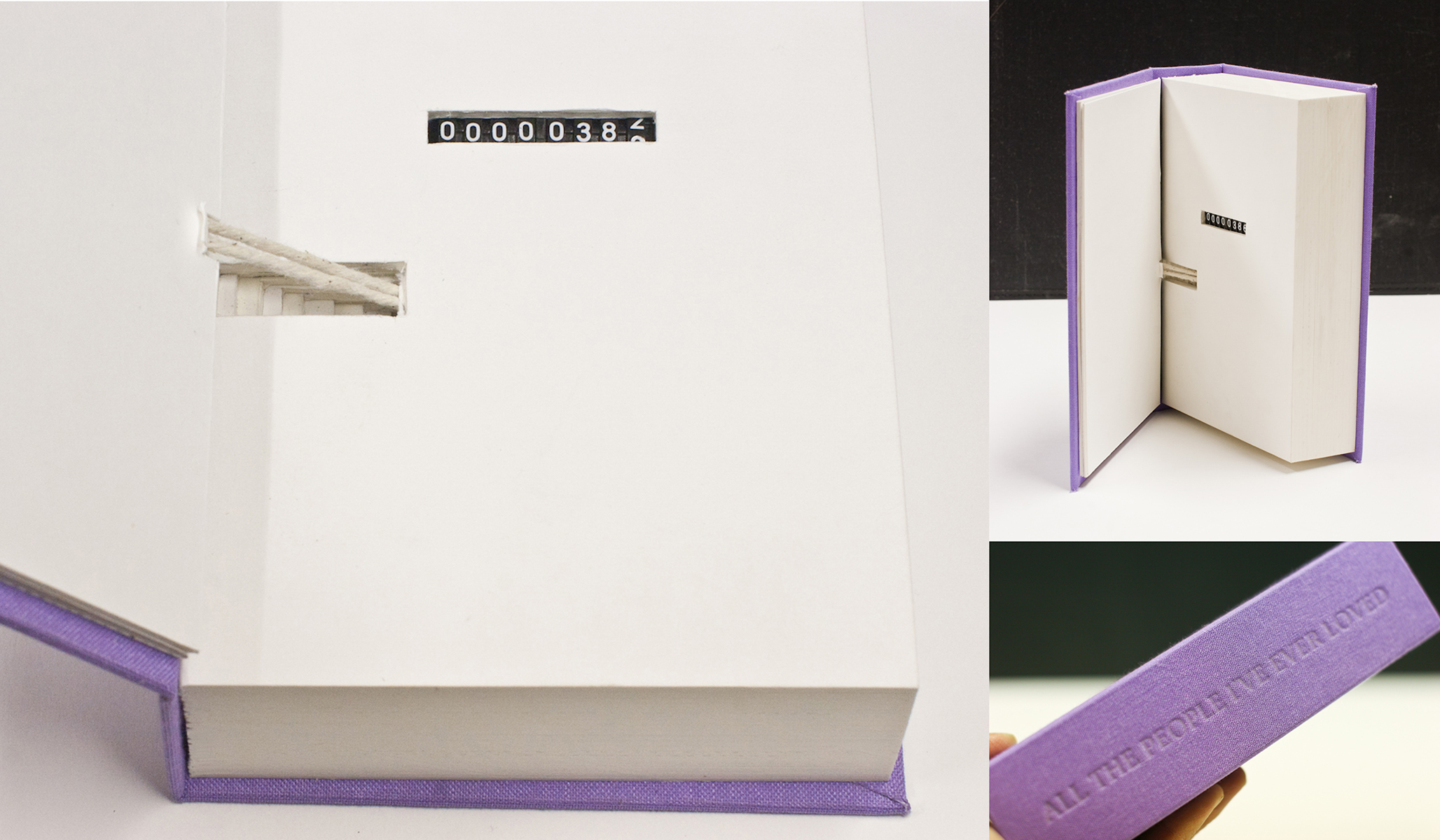 An on-going series of handmade books that are also little kinetic archives. The title references my conviction for revising American education to stress tests less and place more importance on fostering intrinsic learning, one student at a time.

This edition was made for Chido Johnson's travelling project/installation ''Let's Talk About Love, Baby'' so I embossed the spine with another context.

This is a link to one version of "Drum Driving" prior to a collaboration with Manuel Lima. I took 'making time and space for a regular studio practice' to an extreme. I played drum solos from Santa Clarita to downtown Los Angeles before arriving to a 9 to 5 job.

Many drum samples are of car noises as well as from car chase scenes in Hollywood films. To invert sublime aspects of the work's rhythm, collaborator, Brazilian musician/composer Manuel Lima, interjected new original music and white noise replacing any virtuosity by heightening the anxiety and danger inherent to the piece. Since that piece is meant to be screened, I have raw footage that you can skip around to watch instead.

OverOverOver began as a modest attempt to bring artists from Glasgow to Detroit in 2015. Phase 2 of the project is based on Detroit artists visiting the city of Glasgow during May 2018. After being informed about the Scottish city through texts, anecdotes and websites, their presence will result in not just a presentation of their individual practices and ideas, but also an exchange of artists strategies. (2015 - 2018) 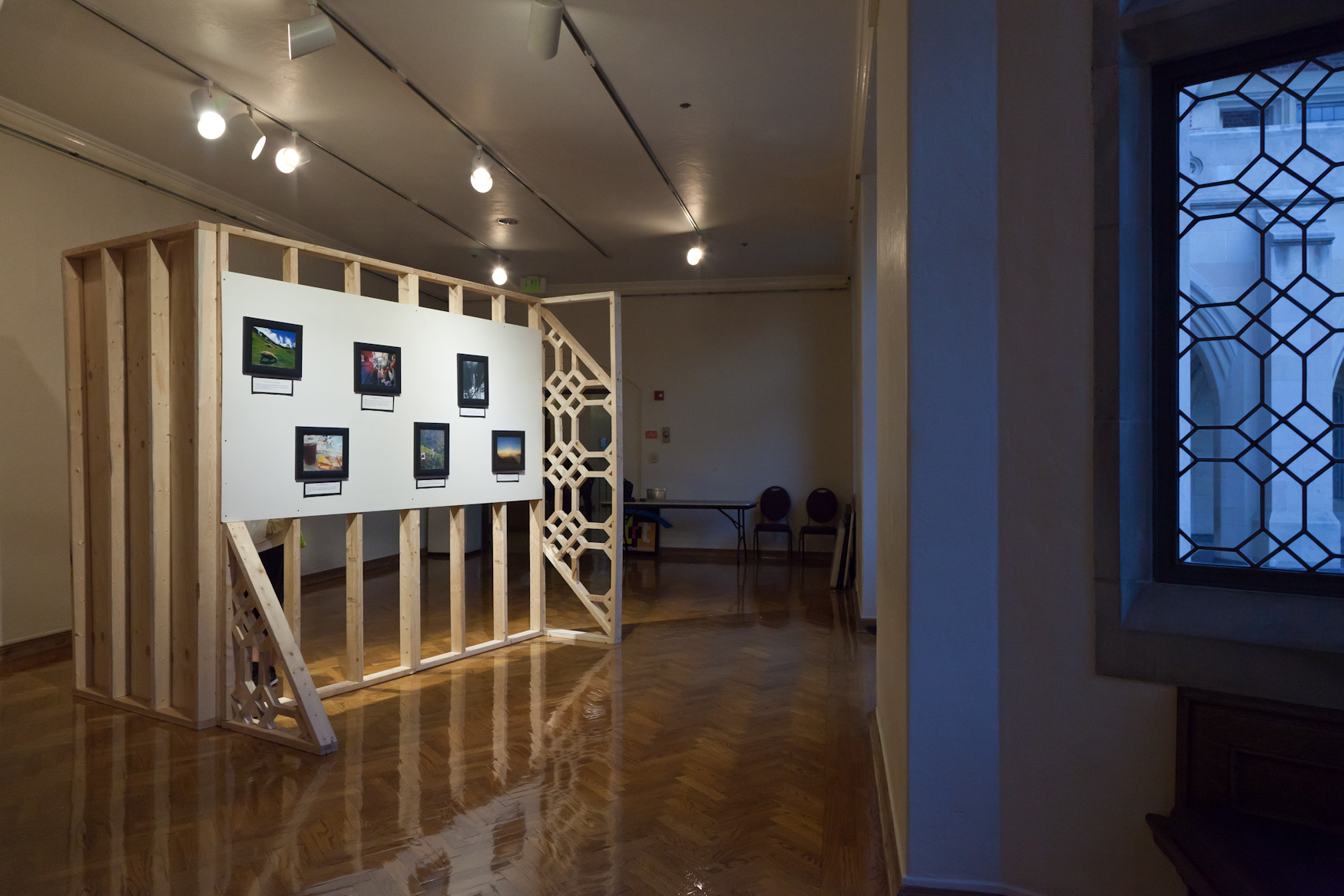 5 custom separate modular walls (which can also be turned into tables) and 1 'wood suit' made up of the offcuts from producing the work. All has been donated to the students and the woodwork design relates directly to the design of the windows and that space.

This solo exhibition took place in the Kerckhoff Gallery of UCLA as custom built walls that could be used by the students to put on their own exhibitions and workshops concurrently.

The structure was built to be taken down and put back up in different orientations. The idea came from the conflict of UCLA students being given a space for all students to use, and the inability to make holes in the walls, which limited the kinds of installations that could take place in the historically protected venue. 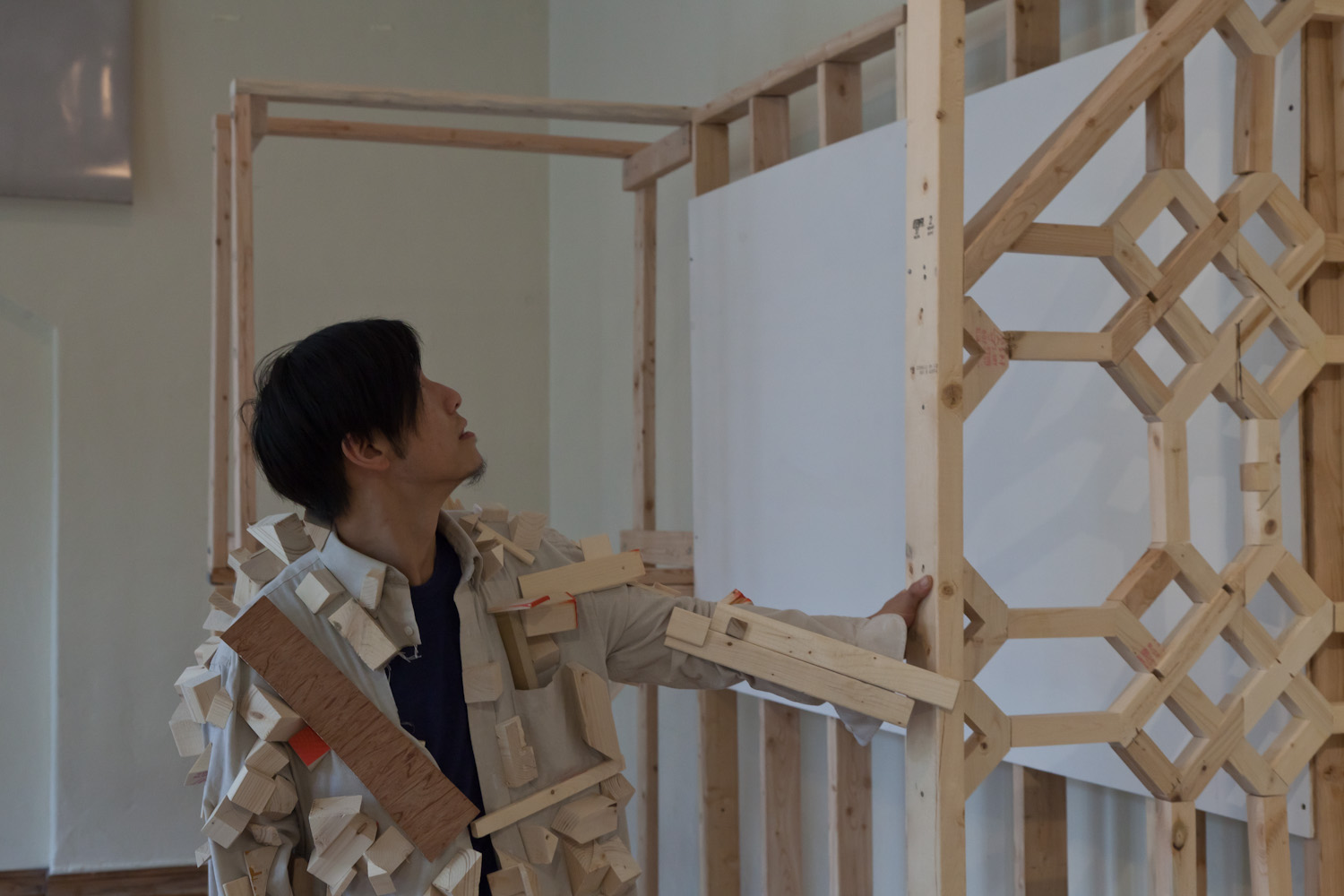 During my MFA degree show opening at the Glasgow School of Art, I secretly planted small works of art on unsuspecting visitors. Using the artwork composed of tile arrangements to keep their attention, myself and a team of trained volunteers planted small tile pieces on visitors through a process I call reverse pick-pocketing. 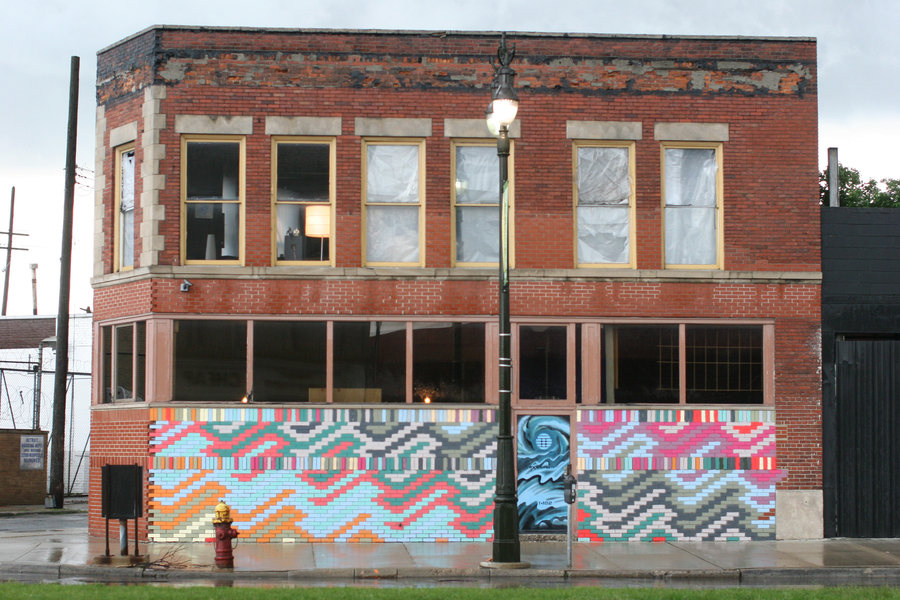 A mashup of the words brick and pixel, "Brixels" originated as an exploration of participation within public art. The website MakeBrixels.com was co-created with Dan Marchwinsky to assist in generating designs and to allow others to access the patterns. Brixels are an instantaneous, interactive paint-by-numbers kind of activity for an existing community that seeks an accessible way to reclaim ownership of a space. By calling attention to the bricks that make up the walls rather than utilizing the whole wall as a 'blank canvas' it brought up communal conversations about permission, skill, and the relationship between branding and a sense of place.

The image above is a mural on Transmat in Detroit (The door is by the grafitti artist, Shades). Four Brixels were created as part of an original commission with Art X Detroit and four other murals have since been fostered by other groups. I'd say that there are somewhere between 10 and 15 murals up right now. 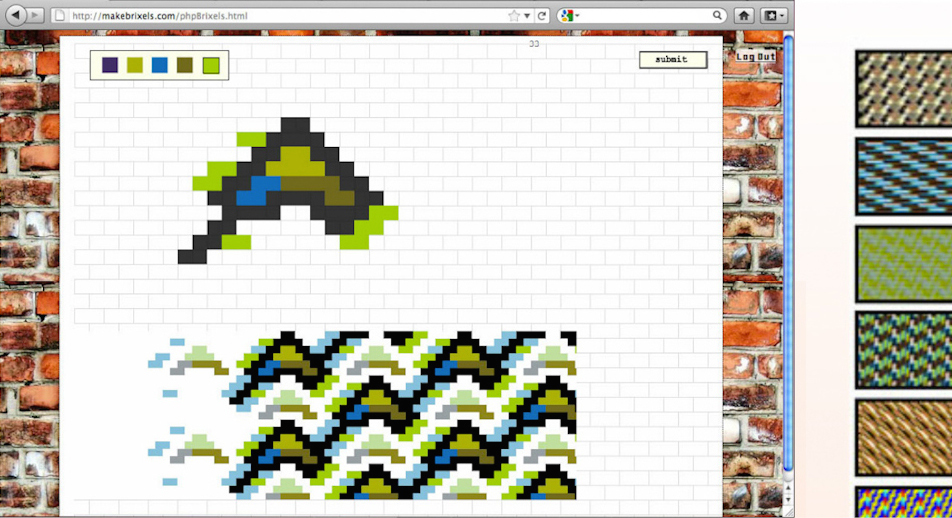 Get off the internet!